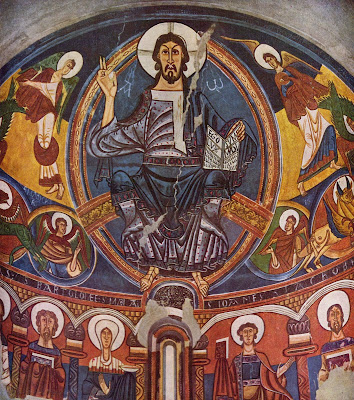 The Valle de Boi in Catalonia, with nine standing Romanesque churches and several ruins in about 85 square miles, has the densest concentration of Romanesque architecture in the world. The largest and best preserved of these churches is Sant Climent de Taüll, consecrated in 1123.

Catalonia in the 12th century was not a prosperous region and the builders of the church could not afford expensive mosaics, so the church was decorated with fresco. These frescoes are amongst the extant Romanesque murals. The apse mosaic is a Christ in Majesty, with Christ seated on the throne of the world. He is flanked by angels and is above medallions bearing the four beasts of the apocalypse. Mozarabic influence is seen in the broad bands of color that form the background.

In 1922 the murals of Sant Climent de Taüll were removed to protect them from theft and are now in the National Art Museum of Catalonia in Barcelona.