The Bobbio Orosius, from the 7th century, introduces an important motif to insular art, the Carpet Page. This is the oldest surviving carpet page. The design is not similar to the Carpet Pages in the later more famous gospel books (Durrow, Lindisfarne, Kells), but its purpose seem to have been similar; To serve as a sort of internal cover. As Dr. J. Kirsten Ataoguz points out over at Early Medieval Art, the Bobbio Orosius carpet page can be compared, at least in layout to the cover of the Stoneyhurst Gospels. (see below for image.) Like the later gospel books this carpet page faces a decorated initial. (I regret not having an image of the initial, and the poor image of the carpet page here, but it is all that is available on the net.)

The Bobbio Orosius also represents an important movement in the religious and artistic history of Europe. Although the manuscript was produced at a monastery in Italy, it was produced by Irish monks. The monastery in question, Bobbio was founded by St. Columbanus, who was from Ireland. Many important communities on the continent were founded by Irish monks. Many of the important "insular" manuscripts were in fact produced in the scriptoria of these communities. These monasteries were to play a vital role in the religious and artistic life of the next several centuries.

The manuscript itself (Milan, Biblioteca Ambrosiana MS D. 23. Sup.) is a copy of the Chronicon of Orosius. In the seventeenth century it was given to the newly established Ambrosian Library in Milan, where it remains today. Dr. Ataoguz also has a discussion of this manuscript at Early Medieval Art.

Posted by Dafydd at 9:59 AM No comments:

The Cathach of St. Columba is the starting point for Celtic manuscripts. The traditional story is that Columba was lent a psalter by St. Finnian on the condition that he not copy it. Columba nevertheless copied in a single miraculous all-night session. When Finnian discovered the manuscript, he appealed to the local king, who awarded the copy to Finnian. Columba raised his kinsmen which resulted in the Battle of Cúl Dreimhne. Columba went into exile, where he founded Iona, as penance for the men killed in the battle. The Cathach is traditionally identified with Columba's copy. The Cathach, however, has been dated to the 7th century on paleological grounds. Throughout the Middle Ages it was carried into battle as a talisman, a practice from which it gets it name. "Cathach" means "battler" in Irish.

The decoration in the Cathach is limited to the first few letters of each Psalm. This decoration establishes several themes that are explored in great depth in later manuscripts. The first letter of each Psalm is enlarged. In earlier manuscripts initial letters had been enlarged and decorated. Bit the decorations in those manuscripts were used to fill space or were appended to the latter. In the Cathach, the decoration distorts the shape of the letter, so that the letter becomes the decoration. Subsequent letters were drawn into the decoration through the gradual shrinking of the letters. In earlier manuscripts the letters after the first letter were the same size as the he rest of the text. In the Cathach, each subsequent letter is a bit smaller than the preceding letter until the letters reach the size of the bulk of the text. The letters are often decorated with small red dots. These three ideas the distortion of letters for decoration, the dimidation of letters, and the use red dots for decoration are ideas worked out in great detail later.
Posted by Dafydd at 12:56 PM No comments: 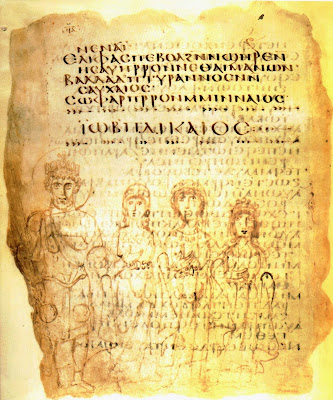 This manuscript represents a bit of a frustration for me. I had read Weitzmann, and some other sources so I thought I had a pretty good idea what were the important manuscripts. Then I checked out Lorenzo Crinelli's, Treasures from Italy's Great Libraries

(New York, The Vendome Press, 1997). One of the early manuscripts was this 5th century Coptic Old Testament fragment (Naples, Biblioteca Vittorio Emanuele III, 1 B 18). Illustrated here is Job and his daughters. I wrote an article about it for Wikipedia. It makes me wonder though, how many more very early manuscripts am I missing? Are there other 5th century Coptic manuscripts. What about other eastern manuscripts. I know about Syriac manuscripts (The Rabula Gospels and the Bible in Paris) are there more? I haven't found a text in English on Coptic manuscripts, although there are some in French. It may be worth my while to struggle through them.

All of that aside, so that you won't have go read the Wikipedia article, here are the basics. This is a fragment of 5th century manuscript of the Old Testament written in the Coptic language. The manuscript has only 8 surviving folios and includes the text from the Book of Job and from Proverbs. One folio has a large pen drawing illustrating Job and his daughters with Job pictured as a bearded man wearing a crown and short tunic. His daughters wear tunics with jewels and diadems. The iconography of Job is very different in this manuscript from that in later centuries. Here he is seen as royal figure while in later portrayals he is seen as humbled and sitting on a dung heap.
Posted by Dafydd at 2:03 PM No comments: