Manuscripts on the web: The British Library

So, I like to go looking around the web for pretty pictures. One type of pretty picture I look for is illuminated manuscript images. One thing that I've found is that several institutions have done a great job digitizing images and making them available. Here are some of the places I've found.

The British Library is fairly generous, there are three ways they make manuscripts available. The big one is their Catalogue of Illuminated manuscripts. Thousands of manuscripts are cataloged here. (Over 1500 from the Harley collection alone.) Each manuscript has a upwards to twenty or so images available. The down side is that they are going methodically through the collections, and they haven't included the Cotton or Additional Manuscript collections yet, and that is where a lot of the really good stuff is.

Equally impressive is their Online Gallery of illuminated manuscripts. This used to be part of their Collect Britain site, and focused on manuscripts made in Britain. Each page is treated as separate work, but you can search by shelfmark. There are plenty of images of little known manuscripts. There are also illuminated manuscript images scattered through some of the other galleries. The Online Galleries also has a Virtual Books section with in depth looks at several important books including a late 17th cent Ethiopian Bible, the "Golf Book, the Luttrell Psalter, the Golden Haggadah, a 15th Century Hebrew Bible from Lisbon, the Sforza Hours, the Sherborne Missal, and the Lindisfarne Gospels. I can't make this feature work due to limitations of my computer and my lack of Geek skills.

A final place to look for images is the Images Online. This is primarily intended as a site to sell high quality images, but their previews are good enough quality for casual browsing. You can find images from many manuscripts not found at the other Brirish Library sites.

Finally for the British Library if you are looking for information on manuscripts, but not images, there is the Manuscript Catalogue. The entries in the catalog range from fairly complete articles, with bibliography to a few words in Latin.
Posted by Dafydd at 7:49 AM No comments:

The Codex Manesse (Heidelberg, University Library, Cod. Pal. germ. 848) is a German manuscript, which was produced in Zürich between 1304 and 1340. It is an important literary manuscript, as it is the single most comprehensive source of Middle High German love songs, the songs of the minnesängers. There are 140 poets represented, who range in social status from the Emperor Henry VI to commoners. As important as the manuscript is for literary history, it is best known for its illuminations. There are 137 portraits of poets, many of them shown in full armor with heraldic devices. These illuminations have been widely reproduced, so much so that are almost the stereotype of High Medieval art. The last I was at Barnes and Noble I noticed at three books with cover art drawn from the Codex Manesse. The illustrations have also been widely used as decorative motifs. I have some wooden plaques with reproductions of some of these pages on my walls right now. Here are some of the images. 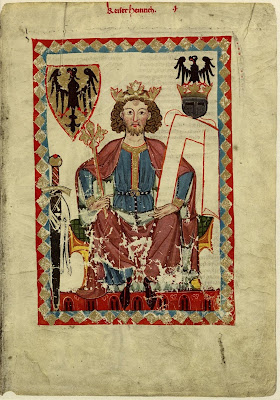 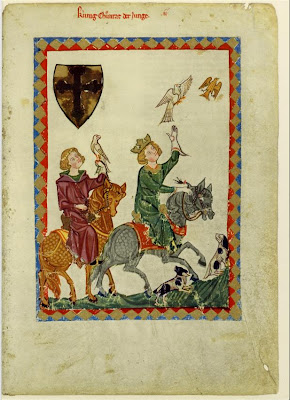 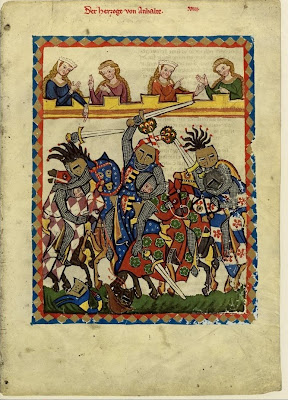 Henry I, Count of Anhalt (The manuscript calls him Duke in error), Fol 17r.

And, since this is a manuscript of songs, here is recreation of one of the songs.

Posted by Dafydd at 4:54 PM No comments: