I would like to compile a bibliography of medieval art. In part it serves as a wish list, in case I ever win the lottery. This is a start, these works are surveys of the entire Medieval period. The only ones I am familiar with are the Calkins, which I own; the 1st edition of the Snyder, which was my Medieval Art textbook at OU; and the Stokstad which I have seen in the library. I quick look via Google at a few syllabuses for Medieval Art surveys seems to show the Snyder and Stokstad are the two most common textbooks in use. I hope to get my hands on the all of these in the near future. I f I do so, I may repost an annotated version of this.

Focillon, Henri, (trans. Donald King). The Art of the West in the Middle Ages, 2 Volumes.

Lacroix, Paul. Arts In the Middle Ages and the Renaissance

Lethaby, William Richard, Medieval Art From the Peace of the Church to the Eve of the Renaissance, 312-1350.

The preceding post were originally posted at my other blog. Posts made here will show up there (except this one). A lot of stuff that shows up there won't show up there. I will probably revisit all of the objects blogged below.

On this blog, I intend to discuss not only manuscripts, but the whole range of medieval art. I reserve the right to define "medieval" and "art" however the hell I wish. I also hope to be able to point to other resources on medieval art. On the name, Monstrous Beauty, it comes from Bernard of Clairvaux, who when discussing (and denouncing) the Romanesque art that decorated the churches of his day railed against the "beautiful monstrosities and monstrous beauties" he found. I like Romanesque art, and the term "Monstrous Beauty" is indeed a great description of it.
Posted by Dafydd at 8:06 AM No comments:

Manuscript illumination, in the broadest sense, covers the decoration or illustration of any written text. The practice started with the Egyptians, who would illustrate portions of The Book of the Dead that would be buried with mummies. One can assume that they illustrated other texts, but so few of those survive it is hard to tell. They certainly would have had to have illustrations in geometry texts. The oldest surviving illustrated text is in fact not from The Book of the Dead, but of a play written to celebrate the accession of Pharaoh Senusret I. It dates to about 1980 BC. Surely other illustrated texts existed.

The Greeks seemed to have learned the practice from the Egyptians. It is significant that there is no evidence of the Greeks illustrating texts before the conquests of Alexander. The Greeks used what Kurt Weitzmann called the "papyrus style", which the Egyptians also used. Since the texts were written on scrolls, heavy paint could not be applied, like it can be to flat pages, as the repeated rolling would cause it to flake off. Instead quick pen and ink drawings were inserted into the columns of text. Pictured here is a papyrus fragment known as the Heracles Papyrus (Oxford, Sackler Library, Oxyrhynchus Pap. 2331) . It tells a portion of the tale of the Twelve Labors of Heracles (or Hercules, if you're feeling Roman), specifically that of the Nemean Lion. Three simple drawings of are inserted into the text columns illustrating the story. Perhaps the drawings were inserted to help a reader quickly find his place in the text, or perhaps because people like pictures. This fragment dates to 3rd century AD, and is one of the few fragments from the classical period illustrating a literary text. Because so few fragments survive, it is impossible to tell if scrolls existed with a higher quality of illustration.

Posted by Dafydd at 5:31 PM No comments:

This is a page from the Caligula Troper (British Library, MS Caligula A XIV). A troper is a collection of tropes, which were new music inserted into the chants of the mass for special feast days. This book was intended to be used by a soloist, and was of a small scale. The opulence of the decoration indicate that it was made for an important patron. The tropes included in the manuscript indicate that it may have been made in Winchester or Worcester. It was made in about 1050. This page has an image of the Wise Virgins (Matthew 25:1-13) as an illustration for the mass for Virgin Saints. The Virgins hold the lamps and torches from the parable, along with branches, which may represent the the palms of martyrdom. The Hand of God blesses them from above. The Virgins' robes are abstracted into a geometric pattern and the are placed against a gold background which gives an unworldly, spiritual feel to the illustration.

The manuscript names comes form its position in the Cotton Library. Robert Cotton was a 17th century bibliophile. He kept his manuscripts in case above which were busts of Roman emperors and Ladies. These busts were used to Catalog the manuscripts. This manuscripts shelfmark, Caligula A XIV meant that the manuscript was in the case under the bust Caligula, on the first shelf, and 14th book from the left. When the Cotton Library became one of the foundational collections of the British Library, its shelfmarks were retained.
Posted by Dafydd at 5:29 PM No comments:

This is a page from the Vatican Virgil (Vatican, Biblioteca Apostolica, Cod. Vat. lat. 3225). This is one of the oldest surviving illuminated manuscripts, dating to about 400. It is one of only three surviving illustrated manuscripts of classical literature from the classical period. In a one sense, this is where manuscript illumination started. The style is similar to the frescoes found at Pompeii and in the Roman catacombs. They are typical of late Roman painting, showing an illusionistic treatment of space and modeling of the human form. There are 77 surviving leaves with 50 illustrations. The manuscript originally probably had about 440 leaves and 280 illustrations.
Posted by Dafydd at 5:28 PM No comments:

The Fuller Brooch
Originally uploaded by uk - charlie
For a change of pace, I thought I would not do a manuscript today. This is the Fuller Brooch, a piece of 9th century Anglo-Saxon jewelry. It may be the only piece of secular Anglo-Saxon metal work to survive above ground. (All other secular pieces have been found as part of treasure hoards. Some religious pieces survived in churches.) Years ago, when I first started at Wikipedia, I wrote my first article about this brooch. To quote what I said there:

The Fuller Brooch is a large disc made of hammered sheet silver inlaid with black niello and with a diameter of 11.4 cm. Its center roundel is decorated with personifications of the five senses. In the center is Sight with large staring oval eyes, surrounded by the other four senses, each in his own compartment. Taste has a hand in his mouth. Smell's hands are behind his back, and he stands between two tall plants. Touch rubs his hands together. Hearing holds his hand to his ear. This is the earliest known representation of the five senses. In the outer border are human, bird, animal and plant motifs.
Posted by Dafydd at 5:27 PM No comments:

Today's manuscript (British Library, Yates Thompson 26) is a twelfth century copy of Bede's prose Life of Cuthbert. (Bede also wrote a verse Life of Cuthbert). This manuscript was produced in northern England in the last quarter of the twelfth century, probably at Durham. It is know to have been at Durham during the later fourteenth century and early fifteenth century. The manuscript has 150 surviving folios with 46 full page miniatures. This miniature shows Cuthbert setting sail with two disciples. All of the illustrations are set before the gold background within the heavy colored frame seen here. This has the effect of emphasizing the otherworldly nature of the scene. This is after all an illustration of a Saint. This is one of my favorite manuscript pages. I particularly love the way the water is piled up in alternating shades of blue into a mound.
Posted by Dafydd at 5:26 PM No comments:

This manuscript dates from the 10th century. It has 151 surviving folios with 52 surviving miniatures. It was probably produced at the monastery at San Millán de la Cogolla. It is now in the Escorial.

Posted by Dafydd at 5:24 PM No comments: 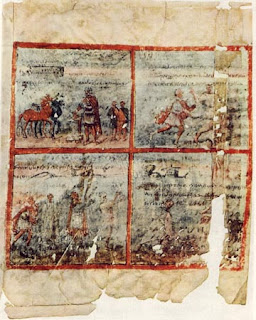