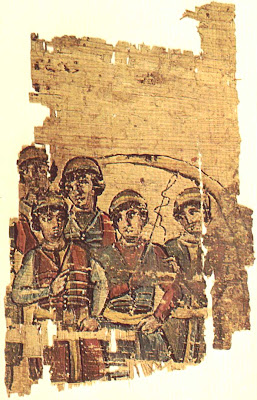 Before the invention of the codex, that is, a book made of leaves bound on one side, books were mostly on scrolls, and the predominate material for scrolls was papyrus. Papyrus was a paper like material made from a plant that grew in the Nile Delta. Greeks and Romans used papyrus as well as Egyptians, but because papyrus did not survive well in moist environments, the vast majority of papyrus survive has been found in Egypt. Because a scroll was continually rolled and unrolled, thick pigments would quickly flake off, so papyrus scrolls were not decorated or illustrated in the manner of later manuscripts, with lavish colored decorations. Scientific and mathematical texts required illustration, while illustration was optional for literary texts. Both types of texts did have illustrations though, and in a similar style, called by Kurt Weitzman called the "papyrus style". In the papyrus style, small, quickly drawn, ink illustrations would be inserted into gaps in the text block. The were seldom colored and usually had little if any background or framing.

Few examples of illustrated papyri remain, and thoe only in fragments. One example is the so-called Heracles Papyrus. It consists of two columns of text which have three quick sketches of Heracles fighting the The Nemean lion.

The iconography of the sketches is fairly conventional, compare the second sketch with this roughly contemporary mosaic from Spain. 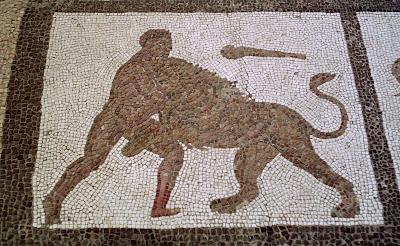 Not all works on Papyrus were quick, rough sketches. The Charioteer Papyrus (pictured at top) is a fragment containing a finely drawn colored illustration of six chariot charioteers. There is no text on the fragment, so it is not known what work it illustrated. Indeed it cannot be said with certainty is came from a scroll or an codex.

The Papyrus style was carried over into early codices, although it was eventually abandoned because of the new opportunities provided by the new format
Posted by Dafydd at 10:47 AM 3 comments:

Hoccleve, The Regiment of Princes 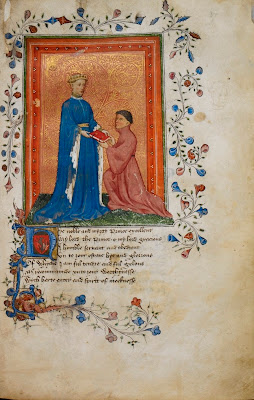 This is a presentation miniature from a manuscript of Hoccleve's, The Regiment of Princes (British Library, Arundel 38, Folio 37 recto). Hoccleve wrote The Regiment for Henry V shortly before his accession to the throne as a homily on virtues and vices. The introductory portion of the poem contains reminiscences of London tavern life, and calls on Sir John Oldcastle, "rise up, a manly knight, out of the slough of heresy." (The heresey being Lollardy.) Oldcastle was an old friend of the Henry V, who Henry eventually had executed for treason and who served as the model for Shakespeare's Falstaff. Hoccleve also took work as a scribe and worked with Adam Pinkhurst, who in 2004 was identified as Chaucer's Adam scrivener. 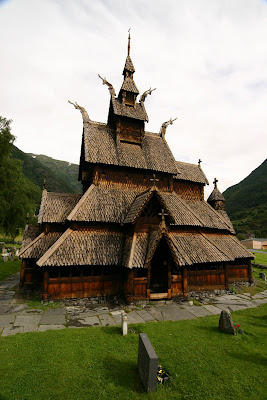 This is the Borgund Stave Church in Borgund, Norway The church was built in the late 12 or early 13th century and is the best preserved medieval stave church. A stave church is a wooden church made with a type of post and beam construction. Almost all surviving stave churches are in Norway. One survives in Sweden and one was moved to what is now Poland. A similar, Anglo-Saxon palisade church survive in England. Although only a few of these churches remain, they were, at one time fairly common throughout northern Europe. Because masonry and other stone work survives better than construction in wood, it easy for modern viewers to loose sight of the reality that much medieval architecture was actually in made of perishable materials. 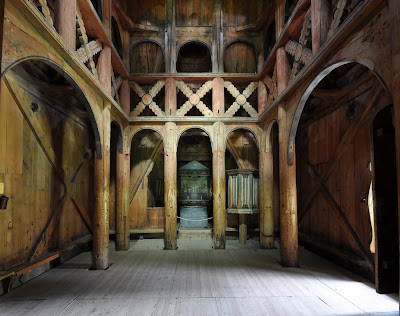 Image credits, Wikipedia.﻿
Posted by Dafydd at 9:12 AM 1 comment: 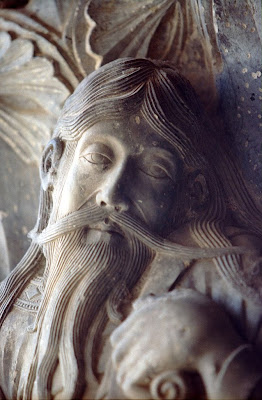 The Church of Saint-Pierre, Moissac was on of the stopping points in southern France on the great pilgrimage road to Santiago de Compostela in northwestern Spain. The church and its cloister host one of the greatest and best preserved collections of Romanesque sculpture in France. Amongst the sculpture is the famous Jeremiah contained within the trumeau (center post) on the south portal. The front of the trumeau has three sets of crossed lions. The lions create a gently scalloped contour along the sides of the trumeau, mirroring the the deeply scalloped jambs on either side of the portal. On the right side of the trumeau, is the sculpture of the prophet Jeremiah. The elongated body and graceful cross-legged posture rises and falls above the over-sized feet to match the scalloping on the front of the trumeau. The hair and beard are stylized plaits formed of groups of incised parallel lines. The stylized drapery clings to the body. The face, unusually well preserved for a sculpture positioned so easily within reach of vandals, is delicate and expressive. The entire effect is not one of portraiture, but instead one of idealized spirituality and reflection. 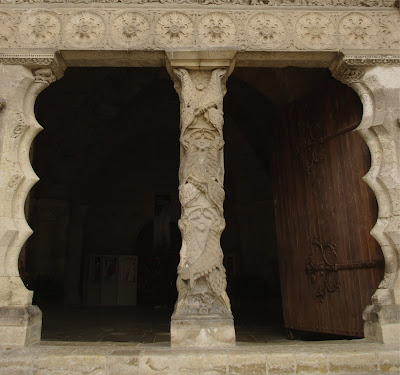 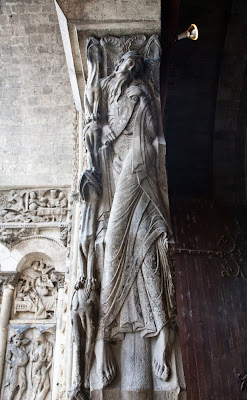 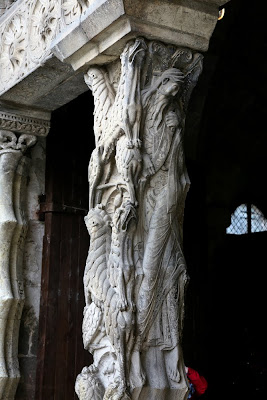 Detail of head, Emmanuel (epierre) on Flickr.
Portal, Elena Giglia (eg65) on Flickr.
Frontal view and oblique view, tilina25 on Flickr.﻿
Posted by Dafydd at 8:52 AM No comments:

The Chludov Psalter is one of the few surviving 9th century Byzantine manuscripts. The early part of the 9th century was a period of iconoclasm in the Byzantine Empire. The Iconoclasm was a reaction against the use of religious images. During this period many works of art were destroyed. The Chludov Psalter was made either in secret during the Iconoclasm or after the restoration of icon, as a polemic against the Iconoclasm. In this illustration, the act of painting over an icon is paired with the Crucifixion, comparing those who destroyed icons to those who crucified Christ. To the right of the text a soldier offers Jesus a sponge filled with vinegar, while below the iconoclast Patriarch of Constantinople, John the Grammarian is seen painting over an icon of Christ using similar sponge attached to a pole. Even the pot for the the patriarch's paint is similar to the pot holding the vinegar used by the soldier.﻿ 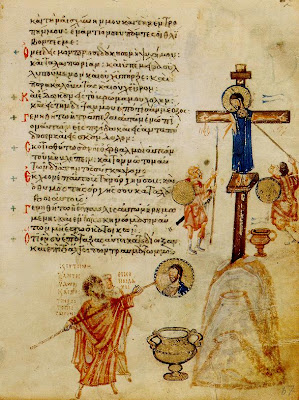 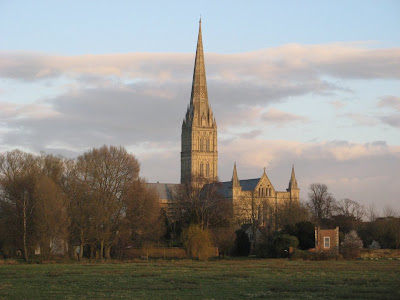 Salisbury was my first. I was an ignorant 18 year old, just graduated from high school, spending the summer in Europe. My brother and I were on our way to Stonehenge and when we got to the town of Salisbury and we found that we had missed the bus. The next one wouldn't run for an hour. We noticed a spire looming over the town, and decided to go take a look. Finding a massive cathedral set in the middle of a park, we thought it would be worth exploring. In 1981, you couldn't enter through the main west portal, instead you entered on the west end, but off to the side. As I came in, it all felt very familiar, we were in the sort of vestibule that any Anglican church might have. Then we turned a corner and were in the nave. To this day, the feeling of absolute awe I felt has stayed with me. Only one other time, high in the Rocky Mountains, have I ever been so completely struck. On that trip we saw other cathedrals, Canterbury, Westminster Abbey, and St. Stephen's in Vienna, but, for me, that initial feeling of shock and joy will always belong to Salibury. We didn't catch the next bus either. 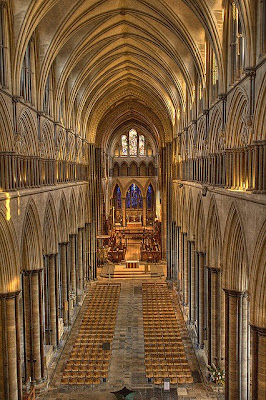 Salisbury, is unusual amongst cathedrals in that it was built entirely one building campaign and was happily spared major renovations in later centuries. There were no previous buildings on the site that could have constrained the plans. As a result it was built largely in a single style and has a unity that many cathedrals lack. 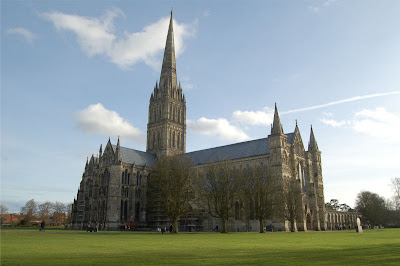 Sutton Hoo was one of the greatest archeological finds in the British history. The grave of a 7th century Anglo-Saxon king, excavated in 1939, contained a literal treasure hoard. One of the most impressive pieces was this large gold belt buckle. The main body of the buckle is an intricate mass interwoven animals, executed in chip carving with black niello highlights. The overall design is symmetrical although the details of interlacing are not. The main plate is hollow and has a hinged back, forming a secret compartment.
Posted by Dafydd at 5:02 PM No comments: 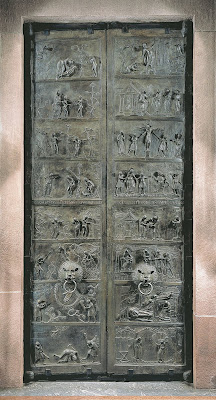 The Bernward Doors, dating from 1015, are large bronze doors cast for the Cathedral of St. Mary in Hildesheim Germany, under the direction of Bishop Bernward. Bernward had visited Rome and may have been inspired by the ancient carved wooden doors of the Basilica of Santa Sabina. These doors represented a massive project for the time, being one of the largest cast bronze objects ever made in northern Europe. The left door contains eight scenes from the life of Adam, and the right eight scenes from the life of Christ. The scenes are carefully chosen and matched to emphasize the theological idea that Christ was the new Adam. For example, the Fall is matched with the Crucifixion, by which the fall was redeemed. The "trial" of Adam and Eve by God, is matched with the trial of Christ by Pilate.

The figures are set in a schematic space with a few plants or architectural details representing landscapes. The figures are in high relief, some of the heads lean out and become free of the background. Yet these nods to three dimensional reality for the scenes are undercut by the tendency for details, such as feet to overlap and break out of the surrounding frames. 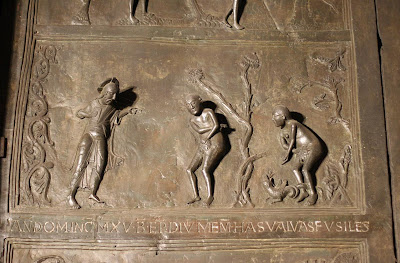 Full door from Wikipedia.
Details from Sacred Destinations on Flickr.
Posted by Dafydd at 9:58 PM No comments: 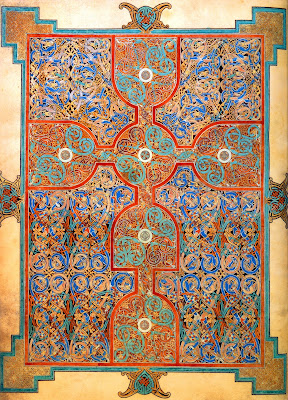 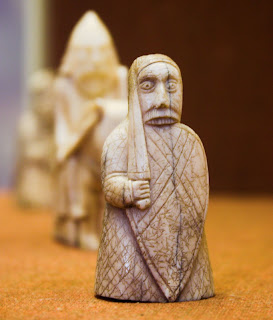 The Lewis chessmen are a group of chess pieces discovered on the Isle of Lewis in 1831. They were carved from walrus ivory and whale teeth in the 12th Century in Norway. There are 78 pieces: 8 kings, 8 queens, 16 bishops, 15 knights, 12 rooks, and 19 pawns, from as many as 5 different sets. The pieces were probably part of the stock of a trader dealing in luxury goods. Some of the pieces bear traces of red pigment, indicating that the two sides were white and red, unlike the modern white and black. Unlike modern chess sets, the rooks are portrayed as soldiers, including four berserks, chewing their shields, while the pawns are small geometric pieces, resembling standing stones. 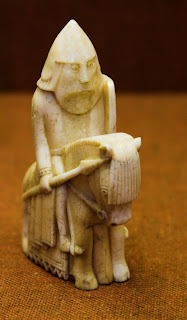 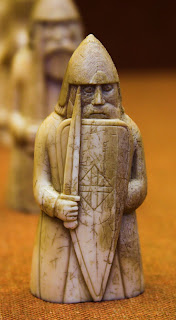 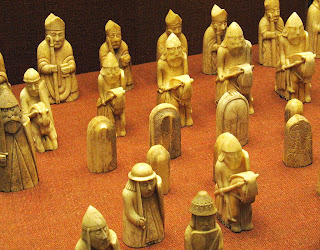 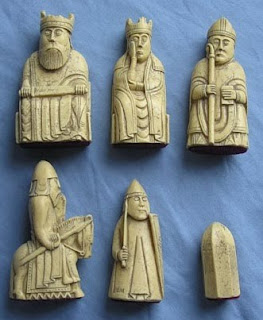 Image credits:
Berserk Rook, Rook, and Knight, RobRoyAus on Flickr.
All others, Wikimedia Commons
Posted by Dafydd at 7:11 AM No comments: 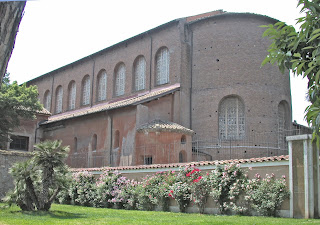 The Basilica of Santa Sabina is one of the oldest surviving early Christian basilicas. A few other basilicas are older (St Paul's Outside the Walls, St. Peter's, The Lateran) but they have all been substantially rebuilt or modified. Only St. Sabina's exterior remains close to the appearance of an early basilica.

Santa Sabina was built about a century after Constantine legalized Christianity. Although, it was not one of the original churches built under Constantine's patronage, but was built in the same style. The exterior is rather severe, without any external decoration. The clerestory windows above the aisles are filled with selenite rather than glass and allow large amounts of light into the interior. The interior was originally decorated with mosaics, but those are now lost. The original 5th century wooden door, carved with scenes from the Bible still exists.

Santa Sabina now serves as the mother church for the Dominican Order.﻿

Image from Wikipedia.
Posted by Dafydd at 5:24 AM No comments: